Home » Afronation: Singer, Rema reacts after he was called out apropos his displeasing performance in Portugal

Mavin record singer and songwriter, Divine Ikubor, professionally known as Rema has responded to backlashes concerning his unsatisfactory performance at the Afronation concert in Portugal.

The Calm Down Crooner noted that the sound setup on the first day of the event was bad, he also claimed that there were no in-ear monitors for artists to keep track of the audio the audience was receiving. 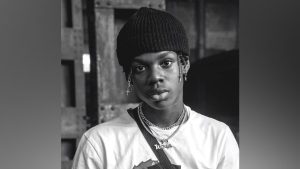 On his official Twitter page on Sunday, Rema reacted to the video of an attendee who stated that the singer and his colleague, Omah Lay, did not sing during their performance on stage.

The attendee stated that the audience could not hear Rema and Omah Lay’s voices during their performance.

“Why are you not singing? We came to see you live. You are a vocalist, your main instrument is your voice.

We came to Portugal to hear that voice live because we love what your voice sounds like on recording. Now we want to hear you live.”

Responding to the video, Rema wrote,

“Whoever came for Afronation day 1 knew the sound was bad. Second delay was feedback from the mic. No in-ear monitors for artists to keep track of the audio the audience was receiving.

Let’s not even talk about provisions they make for artists to come with ‘bands’. Still I made use of live sessions at first and I cut it off and improvised because I wasn’t satisfied with the sound. I even complained on stage.

One thing leads to another, know this! But I just can’t watch people take shots at me and my brother, Omah Lay. Lastly, we’ll all learn, grow and do better as artists and organisers.”

See his reply below… 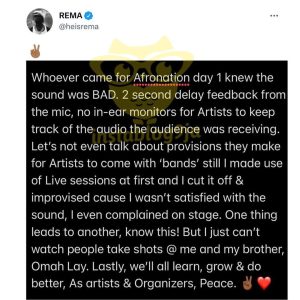