Nollywood actress, Annie Idibia’s Brother, Wisdom Macauley has apologized to her sister and withheld all the false information he reported against the actress. 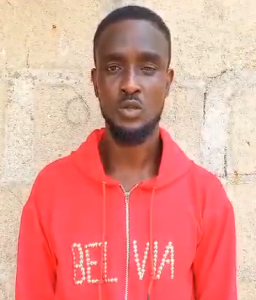 Trendyhiphop reported days ago that wisdom accused the actress of being evil and luring him into drugs.

YOU MAY LIKE: Nigerian Singer, 2Baba and wife Actress, Annie Idibia reacts after Annie’s brother called the actress evil.

He also claimed that Annie paid him in penny after all the strenuous work he does for the actress.

Wisdom cursed Annie and called her names in the viral video where he claimed that Annie forced him to sell drugs for her, he also claimed that the drugs which Annie lured him into, changed his physique.

In reaction to this, the actress and her husband, 2Baba debunked all the allegations and claimed they took care of Wisdom’s family.

After Annie’s reactions, Wisdom was dragged to filth for all the false accusations she reported against her sister.

However, this reaction has triggered Wisdom who publicly apologized to her sister and her husband in another viral video.

In the video, he claimed he was triggered by depression to report false information about his sister.

Wisdom, the brother of actress, Annie Idibia, has apologised for the allegations he laid against her earlier in the week.

He apologised in a new video shared on his Instagram page on Saturday. pic.twitter.com/HWchPxV3ML