Home » BBNaija: See how the wildcards choose other housemates to be evicted.

Big Brother Naija ‘Shine Your Eye’ gets a little more complicated as the two wildcards get to nominate other housemates for this week’s eviction. 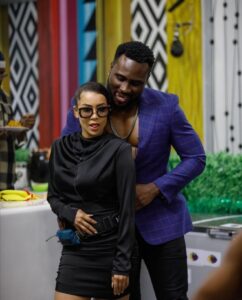 After a week of anticipation in the house, the show’s host, Ebuka Obi-Uchendu, eventually revealed the identities of the two wildcards.

You may also like: BBNaija: Niyi, a married man, was caught on camera admiring Beatrice’s buttocks

The tables have now flipped in favor of the beleaguered wildcards, Pere and Maria, who will be able to choose who will be evicted among the remainder of the housemates.

Pere was given the option of nominating anyone in the house, but he chose Beatrice, Yerin, Niyi, and Whitemoney.

Whitemoney was also nominated by Maria, followed by Yerin, Beatrice, and Jaypaul.

Boma, the Head of House this week, protected Jaypaul from eviction and replaced him with Yousef.