The uproar started after Bella took some eggs which belonged to the Level 2 housemates without attaining Chizzy’s permission.

RELATED ARTICLE: “If you don’t want me again, let me know” – Chi Chi tells Deji as they converse on their complicated relationship (Watch)

Chizzy who is in charge of food in the Level 2 house tackled Bella for not acquiring his consent before taking the eggs, he also went as far as calling her Ekuke (meaning local Dog).

Sheggz was triggered at this moment as he unleashed the beast in him and defended her woman from being disrespected by Chizzy. 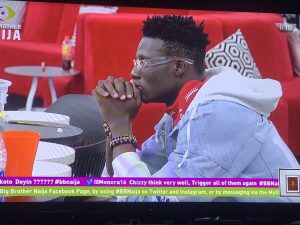 He slammed Chizzy telling him that Big Brother had made him stoop so low to talk to him.

Chizzy then transferred his aggression to Sheggz, he savaged Sheggz and told him that he’s been controlled by a woman.