Bob Risky, a Nigerian crossdresser, has had the fight of his life after his supposed adopted daughter revealed him through her grieve.

Remember how Bob Risky and his Ivorian adopted daughter got into a fight? The young lady has taken to social media to express her dissatisfaction with the claim that Bob Risky sleeps with guys.

She said, in her own words: 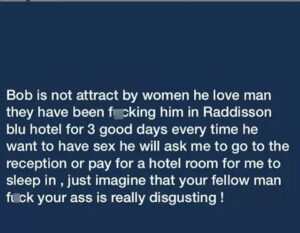 Advertisement
More On
Search For Contents