Home » Browny Igboegwu, a famous actor, was heavily chastised on social media for serving as an usher during Obi Cubana’s mother’s funeral.

Nigerian residents have taken to social media to ridicule famous Nollywood actor Browny Igboegwu after he was filmed condoning ushering at the funeral of Obi Cubana‘s mother.

This came when the actor was photographed wearing an usher tag on his shirt, smiling to the camera with a friend who had apparently been assigned to ushering duties. 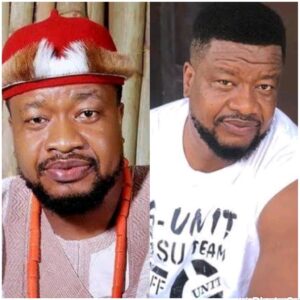 Nigerians couldn’t keep their cool and criticized his financial worth, advising him to never flaunt about his wealth again in his life.

The actor, on the other hand, has failed to respond to any criticism, despite taunters taunting him on his Instagram account.

Another prominent Nigerian Instagram influencer was humiliated after he succumbed to humility and revealed himself to be the event’s cameraman.