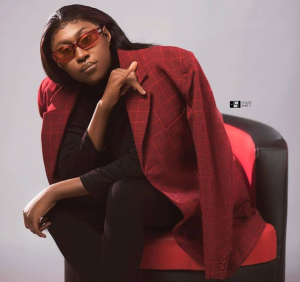 YOU MAY LIKE: May D describes in-depth what he went through without a deal in the P-square Mansion

According to the negative reactions she gushed towards the song, Cynthia condemned the song and gushed that they made the music in a hurry by saying…

“Burna boy is losing it with his music arrangement. Wizkid was ok but the last bars was weak #b’dor To me I feel like they made the record in a hurry so I will give it a 5/10. That intro was unnecessary and the hook or chorus bars aren’t complete. Please I need ginger part 2. As I no want do music again at least make una they inspire me.”

However, Morgan has made a U-turn apropos her review towards Burna Boy’s song titled Balon d’Or.

She revealed this while blasting a Tweep that criticized her former music colleague, Burna Boy. 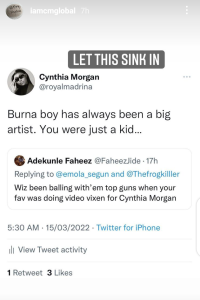 Cynthia also confessed that she lost her contract with ex-boss, Jude Okoye because she chose Burna Boy by saying…

“To me Burna Boy was the highest artist in Africa when I picked him for simatinya video and I remembered almost losing my record deal with Jude Okoye’s label for standing my ground that it was only burna boy I wanted and no one else.

I know alot you love living in lies either due to tribalism or personal hatred but please I never want to see my name in any sentance that has to do with a Burna Boy slander. He is the best and the biggest artist in Africa till i pick the mic again” 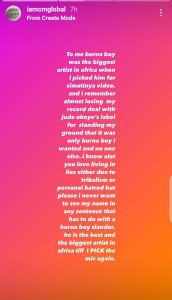