Home » “I apologise in advance” – Actress, Adesua Ettomi, cries out after her one-year-old son took her phone and blocked some of her followers

Nollywood actress, Adesua Ettomi Wellington has cried out after her one-year-old son, Zaiah invaded her Instagram account, unfollowed, and blocked some of her followers.

The fast-rising singer took to her Instagram account and announced that she was not the one that blocked two of her followers. 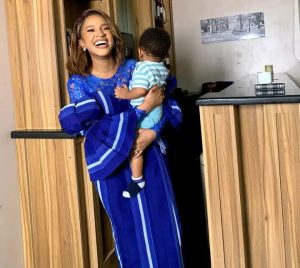 RELATED ARTICLE: “This guy is a complete riot” – Actress, Adesua Etomi says as she shared an intimate chat with her husband, Banky W

The mother of one also revealed that she has begged the people who were affected by the incident, she also apologized for other misfortune her son caused which she’s not aware of.

“Zaiah had my phone. How will I track what he did?

BLOCKED TWO PEOPLE, I HAVE GONE TO BEG.

PLS I APOLOGISE IN ADVANCE FOR ANYTHING ELSE”

The actress also shared the response she got from a colleague, Jemima Osunde, who wrote:

“Zaiah is the real talk and do cause you’ve been threatening to unfollow/ block me since 19kokoro and your chest no carry am. Zaiah said hold my bottle mama

Sha warn your son. T for thanks.”

See her posts below… 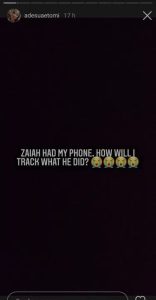 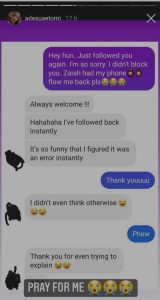