Home » “I would rather be single throughout my life than be in a marriage without mutual respect” – BBN star, Tega drops bombshell

Reality TV star, Tega Dominic has disclosed that she would rather be single throughout her entire life than be in a violent marriage that has zero mutual respect.

The BBNaija Season six star revealed this via her Instagram account where she advised fellow women to normalize quitting a biased relationship before it leads to marriage. 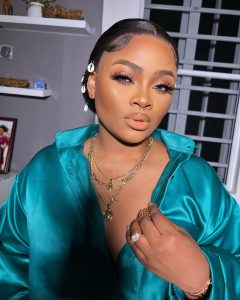 Tega who divorced her husband in 2020 also stated that wives should assist their husbands in providing for the family.

“I’d rather have my single life than some of the ndi ‘my marriage will work or is working’ marriage, pls, I am of the 2% that will say no to rubbish.

Its either 100 investment or not, don’t come telling me I should endure, dear woman do not endure (if you like o), if you both aint bringing 100 to the table then gtfo. I can be a fool for u but if I don’t see same, I don go. Mutual respect and understanding its for me thanks”. 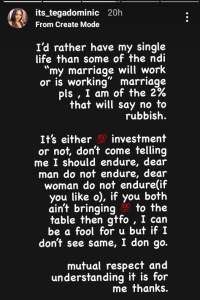