TrendyHipHop had earlier reported that Mavin record boss, Don Jazzy produced ‘Overdose’ which was voiced by his record label Stars.

The song attained the top five position at the Apple Music store after the release date.

However, the song attained No. 1 at the Apple Music store after Starboy honcho commented on the music post made by Crayon.

Crayon took to his verified Instagram handle and wrote:

“So I went to the mainland over the weekend to show some of my fans how to do the shoulder dance move, I had so much fun first stop Ikeja city mall, second stop, Fela shrine, I’m coming to you next”

“If I marry okay this song” 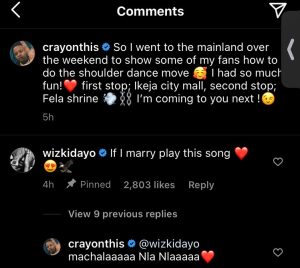