Manchester United and Ajax head coach Erik ten Hag held “positive” talks on Monday with the club hierarchy thought to be impressed by his vision and philosophy.

This was unleashed after the interview which was part of the ongoing process to appoint the next permanent first-team boss.

YOU MAY LIKE: Manchester United midfielder, Paul Pogba sets to reward anyone with information apropos his burglarized house 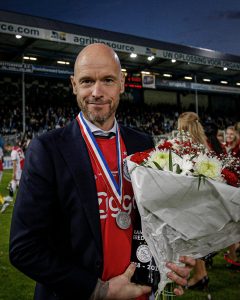 Veteran sports analysts, Fabrizio Romano and Skysports reported that the talks have reached a more advanced stage but do not mean Ten Hag has emerged as the club’s first choice.

As part of the process, United also plans to speak to their other preferred candidates.

According to United sources, there is no early favorite yet and they are open-minded about the identity of their new manager.

However, former Manchester United striker Louis Saha believes the club can still attract the best managers in the world but admits whoever takes over will have a tough job.

Ajax and Ten Hag’s representatives have been contacted for comment.