It’s a really good time for American rapper, DaBaby as tours the streets of Lagos Nigeria with DMW honcho, Davido.

TrendyHipHop had earlier reported that the rapper stormed Nigeria at Lagos Airport in Nigeria as Davido welcomed him in a grand style. 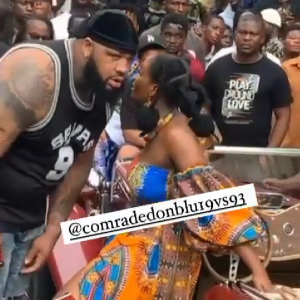 The rapper reportedly boarded Nigeria apropos his Music Video project which he has with Davido as they were also captured shooting video on the streets of Lagos.

It seems to be a memorable moment for some of DaBaby’s aides and bouncers as one of the bouncers was captured in a viral video flirting with a Nigerian vixen who also responded to bouncer positively by giving him her number.