The singer who is known to have collaborated in her musical career with the likes of Chris Brown, Usher, Kelly Rowland, Ariana Grande, and Trey Songz confirmed this after a fan asked her when she would drop her song with Davido.

“When are you dropping ur song with Davido?” as tweeted by the fan.

Also, the singer retweeted with the reply; “Soon @davido #DWST.”

See the Tweets; below. 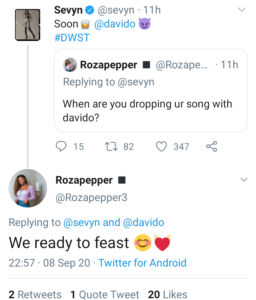