Nigerian singer, Oxlade reacts to his leaked sex tape by apologizing to his fans and the young lady in the video for the humiliation he has caused by letting his bussiness out.

Recall, we reported earlier Oxlade was dragged via social media because of his leaked sex tape..

However, Oxlade had taken to his social media handle sharing an apology letter where he reacted to the sex tape explaining that he is ashamed of what had happened.

Oxlade stated that the sex tape leaked as a result of betrayal and warned fans that betrayal is real as his personal business is being put to the public.

Oxy also apologized to his fans and the young lady in the viral video whom he declared that she didn’t deserve the exposure.

In his letter of apology, Oxlade wrote…

“I am conscious thst my business is out in the public and I am not the type of person to put my personal business out there.

Betrayals are very real and in this same token I want to apologize to the woman in the video, who did not deserve this type of exposure, and lastly apologies to my fans and well-wishers”

See his letter below… 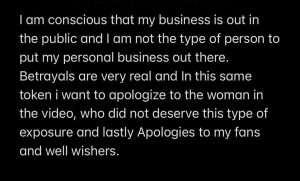