Filma claims they were seriously involved before she became pregnant and the relationship quickly deteriorated. She alleges she informed Buju (BNXN) about the kid, but that he is now trying to hush her up and avoid accountability. She also said that he wanted to have a child when he moved to Sweden, just not with a Nigerian girl.

But when she became pregnant, he shut her out and had her friends and manager push for an abortion. Filma elaborated by saying that Buju’s management had the nerve to tell her she should count herself lucky because she got to have sex with the rapper. 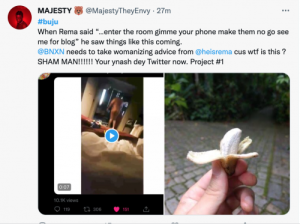