Home » Wizkid makes history as his song “Essence” debuts at No. 82 on the Billboard Hot 100, being the first Nigerian song to do so.

For a reason, he changed his name to Big Wiz…

Wizkid, a Nigerian music star, has created history once more. His song “Essence” made history as the first Nigerian song to rank at No. 82 on the Billboard Hot 100.

This remarkable achievement comes after the song made its debut appearance on the Billboard Bubbling Under Charts.

The news was announced on their official Twitter account, where they also thanked Alte Queen, Tems, for her contribution to the song.

Tems not only made her debut appearance on the Billboard chart, but she also set a record by becoming the first Nigerian female artiste to do so. 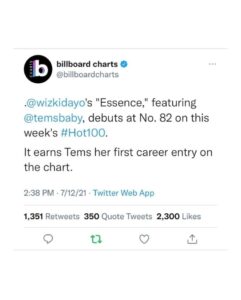 Since its release in 2020, Wizkid’s Made in Lagos album has received numerous plaudits, including the song “Essence.” 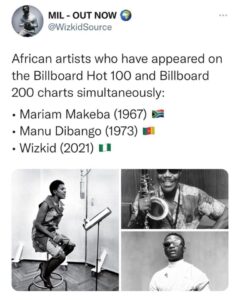