Nominees for the 2022 sixth edition of audience data-based awards, the NET Honours People’s Choice Awards, were publicly announced during the week. 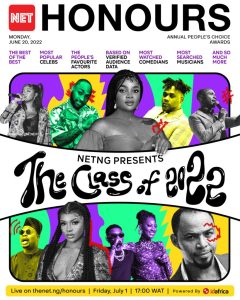 According to a statement from ID Africa, owners of Nigerian Entertainment Today, there are new categories that were added in this year’s edition.

The 2022 year’s edition features 35 categories, including 15 new voting categories that will give fans more power to choose their favorite celebrities for the awards.

Top artists, Wizkid and Simi, lead the pack of NET Honours Class of 2022 nominees with four nominations each.

Other notable nominations include Mr. Macaroni, Sabinus, Kiekie, Taaooma, and Broda Shaggi, who secured two nominations each for Most Popular Comedian and Most Popular Social Content Creator.